TRACKMANIA® UNVEILS ITS CONSOLE AND CLOUD VERSIONS LAUNCHING IN 2023 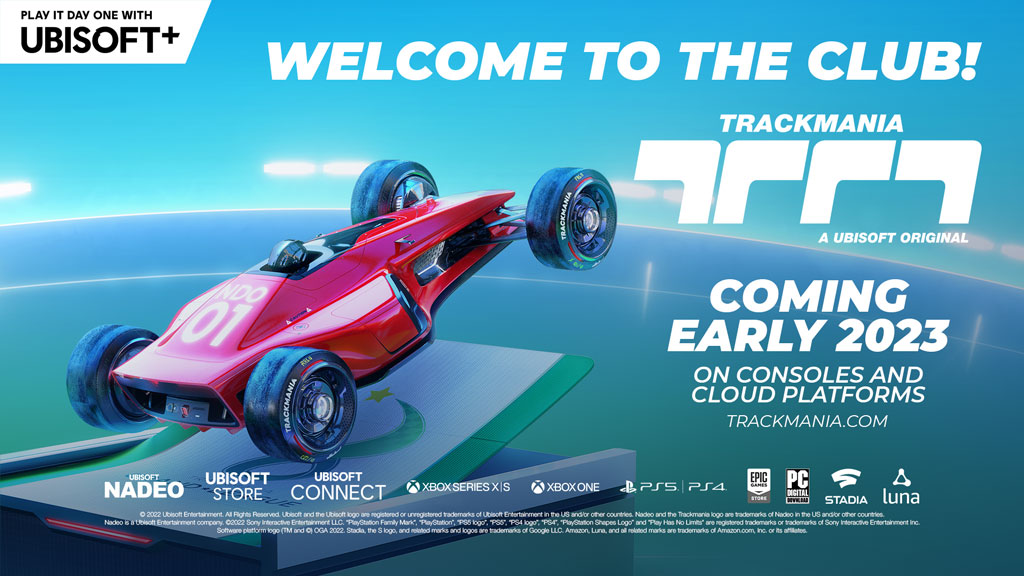 Trackmania® on consoles will be free-to-play and include cross-play and cross-progression between all its available platforms.

Trackmania® is coming on consoles and select cloud platforms with the game being available early 2023 on Xbox One, Xbox Series X | S, PlayStation®4, PlayStation®5, Stadia, Amazon Luna as well as Windows PC through the Ubisoft Store. As part of this launch, Trackmania® will remain Free-to-play and will now include Cross-Play and Cross-Progression among all these platforms on top of parity for official racing content between all platforms.

With this new addition, the Trackmania® community, currently over 10 million fans strong, will welcome new players to experience the full extent of the game’s features: they will race on some of the 280,000 tracks created by the players since its release two years ago, team-up with friends in the Royal and ranked game modes, enjoy  new official seasonal  campaigns dropping every 3 months, or dive into the Track editor, allowing players to unlock their full imagination by providing thousands of blocks and items for them to create the most extraordinary tracks ever imagined.

Trackmania® on console will also give the option to upgrade to the two premium access plans already available on PC platforms. In addition to regular Esports events like the Cup Of The Day, these premium access tiers unlock more social and community-oriented features such as Trackmania clubs, allowing groups of players to create and share their own car customizations, organize private rooms and most importantly, the ability to build their own campaigns and competitions.

And lastly, Trackmania will also bring a new feature allowing players to display their skill in a unique way as they will be able to unlock evolutive car skins based on their driving talents and achievements into some parts of the game. Also, more than 150 new blocks and items will be available on all platforms to celebrate the console release.